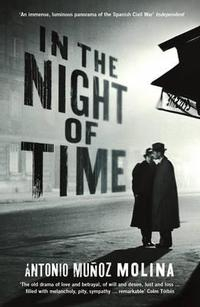 IN THE NIGHT OF TIME

Sinopsis de IN THE NIGHT OF TIME

October 1936. Spanish architect Ignacio Abel arrives at Penn Station, the final stop on his journey from war-torn Madrid, where he has left behind his wife and children, abandoning them to uncertainty. Crossing the fragile borders of Europe, he reflects on months of fratricidal conflict in his embattled country, his own transformation from a bricklayer's son to a respected bourgeois husband and professional, and the all-consuming love affair with an American woman that forever alters his life. A rich, panoramic portrait of Spain on the brink of civil war, In the Night of Time details the passions and tragedies of a country tearing itself apart. Compared in scope and importance to War and Peace, Munoz Molina's masterpiece is the great epic of the Spanish Civil War written by one of Spain's most important contemporary novelists.

0 reseñas sobre el libro IN THE NIGHT OF TIME