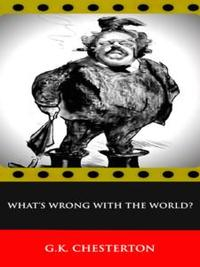 WHAT'S WRONG WITH THE WORLD?

G. K. Chesterton, the bombastic man of letters and paradoxical militant for God, died at the age of sixty-two, in his beloved country town of Beaconsfield (Disraeli had previously been its most illustrious resident), worse for wear after decades of non-stop writing, editing, and lecture-touring. If the Catholic Church makes G. K. Chesterton a saint (as an influential group of Catholics is proposing it should) the story of his enormous coffin may become rather significant. Chesterton’s coffin was too huge to be carried down the stairs of his house in Beaconsfield, its occupant being legendarily overweight at the time of his death, in 1936. So it went out a second-floor window. The wonderful spirit of early Chesterton got channeled into the Father Brown detective stories, which he wrote for money, and into the torrent of weekly journalism, which he kept up right until his death. But even in his final years the sinuosity of his mind and the beauty of his line remained strong. Intellectually Chesterton was as nimble as a hummingbird. His writing became famous for its use of paradox: little controlled explosions that ranged from everyday clichés (“travel narrows the mind”) to the perils of the suffragette movement: “Ten thousand women marched through the streets of London saying: ‘We will not be dictated to’, and then went off to become stenographers.” Everything about Chesterton was larger than life: his height, his bulk, and a list of publications long enough to stock a small library. In a career spanning four decades, he produced some 80 books, 200 short stories, 4,000 essays and countless newspaper columns that he dictated while chuckling at his own jokes and jabbing at the air with a knife. A “man of colossal genius”, according to G B Shaw, he sometimes seemed to have several other writers nested inside him, like Russian dolls. G.K. CHESTERTON