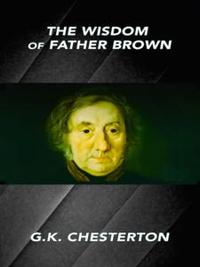 THE WISDOM OF FATHER BROWN

The With his round face, pipe and umbrella, the shambling priest When G.K. Chesterton first published his first As this second volume of his adventures shows, the worldly-wise sleuth has an uncanny ability to bring even the most elusive wrongdoer to justice. Intellectually Chesterton was as nimble as a hummingbird. His writing became famous for its use of paradox: little controlled explosions that ranged from everyday clichés (“travel narrows the mind”) to the perils of the suffragette movement: “Ten thousand women marched through the streets of London saying: ‘We will not be dictated to’, and then went off to become stenographers.” Everything about Chesterton was larger than life: his height, his bulk, and a list of publications long enough to stock a small library. In a career spanning four decades, he produced some 80 books, 200 short stories, 4,000 essays and countless newspaper columns that he dictated while chuckling at his own jokes and jabbing at the air with a knife. A “man of colossal genius”, according to G B Shaw, he sometimes seemed to have several other writers nested inside him, like Russian dolls. G.K. CHESTERTON