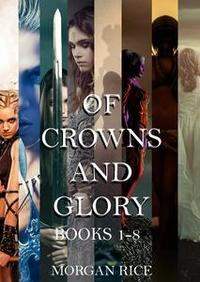 THE COMPLETE OF CROWNS AND GLORY BUNDLE (BOOKS 1-8)

“Morgan Rice has come up with what promises to be another brilliant series, immersing us in a fantasy of valor, honor, courage, magic and faith in your destiny. Morgan has managed again to produce a strong set of characters that make us cheer for them on every page.…Recommended for the permanent library of all readers that love a well-written fantasy.” --Books and Movie Reviews, Roberto Mattos (regarding Rise of the Dragons) Morgan Rice’s #1 bestselling epic fantasy series! OF CROWNS AND GLORY tells the epic story of 17 year old Ceres, a beautiful, poor girl in the Empire city of Delos. By day she delivers her father’s forged weapons to the palace training grounds, and by night she secretly trains with them, yearning to be a warrior in a land where girls are forbidden to fight. When Ceres stuns the court with her hidden powers, she finds herself wrongfully imprisoned. 18 year old Prince Thanos despises everything his royal family stands for and yearns to break free. Smitten, he must decide if he will risk it all for her. As a revolution erupts, Ceres may have a destiny she never knew she had, and as tragedy begins to unfold, the relationship Ceros and Thanos both thought was fated, may just slip away from both of their fingertips. Visit www.morganricebooks.com for news on the upcoming release of the new fantasy series!