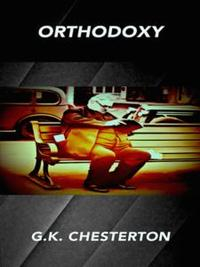 ‘I have often had a fancy,’ One of the great benefits of reading Gilbert K. Chesterton is that one begins to understand how people thought at the turn of the last century. We find not only good reason and a sense of wonder, but a level of sanity and civility foreign to modern culture. Even his philosophical enemies are his jovial friends. Chesterton predicted modernism would lead to madness, and in the following 80 years the world went mad. Chesterton predicted that questioning everything would lead to the abandonment of reason, and Postmodernism has finally admitted to exactly that. Chesterton claimed that man was at the crossroads, and had clearly made the wrong turn. The philosophies against which Chesterton argued have now run their full course in the 20th century, and everything Chesterton claimed they would produce has come to pass. Chesterton capped his brilliant literary career with this exploration of "right thinking," and how it led to his acceptance of the Christian faith. Although this is a very personal account of his spiritual conversion, Chesterton makes it clear he came to a rational decision based upon his scholarly examination of Christianity's arguments, intending to provide a "positive" companion to the previous Heretics. Intellectually Chesterton was as nimble as a hummingbird. His writing became famous for its use of paradox: little controlled explosions that ranged from everyday clichés (“travel narrows the mind”) to the perils of the suffragette movement: “Ten thousand women marched through the streets of London saying: ‘We will not be dictated to’, and then went off to become stenographers.” Everything about Chesterton was larger than life: his height, his bulk, and a list of publications long enough to stock a small library. In a career spanning four decades, he produced some 80 books, 200 short stories, 4,000 essays and countless newspaper columns that he dictated while chuckling at his own jokes and jabbing at the air with a knife. A “man of colossal genius”, according to G B Shaw, he sometimes seemed to have several other writers nested inside him, like Russian dolls. G.K. CHESTERTON