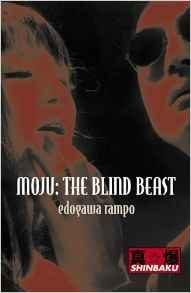 In Edogawa Rampo's Moju: The Blind Beast, a deranged, scarred and sightless sculptor kidnaps a model and imprisons her in a psychedelic labyrinth of giant sculpted eyes and other outlandish body parts, before dismembering her in a fearful blood-orgy. Her limbs, head and torso are later found scattered throughout Tokyo. The blind killer continues his sexually-charged spree of amputation and decapitation, claiming several more victims before finally presenting his work at an acclaimed art exhibition in which the sculptures are a little too life-like for comfort... The most disturbing of Rampo's novels, Moju: The Blind Beast is a classic of grinding horror and weird sex, tainted with a virulent black humour. It represents one of the earliest literary examples of the Japanese "erotic-grotesque" genre, in which such subjects as dismemberment, mutilation, coprophilia and cannibalism are presented in a perverse sexual context. This first-ever English translation of Rampo's classic is illustrated throughout and also includes an introduction by Jack Hunter, author of Eros In Hell. Moju: The Blind Beast is a significant precursor to the prevalent Japanese horror fiction of today (such as The Ring), and as such will be of great interest to all fans of that genre in both literature and cinema.