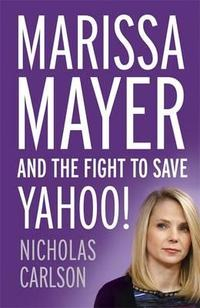 MARISSA MAYER AND THE FIGHT TO SAVE YAHO

From her controversial rise and fall from power at Google, to her dramatic reshaping of Yahoo's work culture, people are obsessed with, and polarised by, Marissa Mayer's every move. She is full of fascinating contradictions: a feminist who rejects feminism, a charmer in front of a crowd who can't hold eye contact in one-on-ones, and a geek who is Oscar de la Renta's best customer. Marissa Mayer and the Fight to Save Yahoo! tells her story. Back in the 1990s, Yahoo was the internet. It was also a $120 billion company. But just as quickly as it became the world's most famous internet company, it crashed to earth during the dotcom bust. And yet, Yahoo is still here, with nearly a billion people visiting it each month. Marissa Mayer and the Fight to Save Yahoo! tells the fly-on-the-wall story of Yahoo's history for the first time, getting inside the board room as executives make genius calls and massive blunders. Dan Loeb, a tough-talking hedge fund manager, set his sights on Yahoo in 2011. He grew up idolising the corporate raiders of the 1980s, building a career being more vicious than any of them. Without Loeb's initiative, Marissa Mayer would never have been given her chance to save the company. This book tells the tale of how Dan Loeb spotted the real problem inside Yahoo - its awful board - and tore it apart, getting two CEOs fired in the process. When Marissa Mayer first started at Yahoo in 2012, the car parks would empty every week by 4.00 p.m. on Thursday. Over the next two years she made plenty of mistakes, but she learned from them. Now Yahoo's culture is vibrant and users are coming back. In Marissa Mayer and the Fight to Save Yahoo! Nicholas Carlson also explores what may be the internet's first real turnaround.