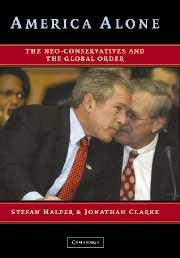 AMERICA ALONE: THE NEO-CONSERVATIVES AND THE GLOBAL ORDER

America Alone explores how George W. Bush’s election, and the fear and confusion of September 11, 2001, combined to allow a small group of radical intellectuals to seize the reins of U.S. national security policy. It shows how, at this ‘inflection point’ in U.S. history an inexperienced president was persuaded to abandon his campaign pledges (and the successful consensus-driven, bi-partisan diplomacy that managed the lethal Soviet threat over the past half-century) and adopt a neo-conservative foreign policy emphasizing military confrontation and ‘nation-building’. To date, the costs - in blood, money and credibility - have been great and the benefits few, with traditional conservatives deploring Bush’s approach. America Alone outlines the costs in terms of economic damage, distortion of priorities, rising anti-Americanism, and reduced security. Then it sets out an alternative approach emphasizing the traditional conservative principles of containing risk, consensus diplomacy and balance of power.