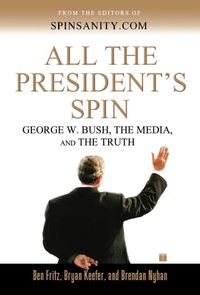 ALL THE PRESIDENT'S SPIN: GEORGE W. BUSH, THE MEDIA, AND THE TRUTH

All the President's Spin, the first book from the editors of the acclaimed nonpartisan website Spinsanity, unmasks the tactics of deception and media manipulation that George W. Bush has used to sell his agenda to the American people. From his campaigns for tax cuts to the debate over war in Iraq, President Bush has employed an unprecedented onslaught of half-truths and strategically ambiguous language to twist and distort the facts. Fritz, Keefer, and Nyhan's powerful critique of Bush's record of policy deception explains why the media has failed to hold him accountable and demonstrates the threat these tactics pose to honest political debate. This is the essential book for every citizen who wants to understand how George W. Bush has misled the nation and why, if left unchallenged, all the President's spin could soon become standard practice -- a devastating development for our democracy.

0 reseñas sobre el libro ALL THE PRESIDENT'S SPIN: GEORGE W. BUSH, THE MEDIA, AND THE TRUTH