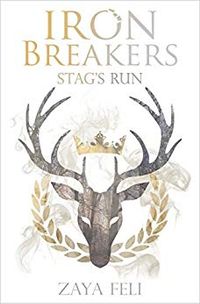 Ren Frayne is the bastard son of the Queen of Frayne, a title he’s more than comfortable with when it brings him limited responsibilities and all the luxuries of life he could ever want. But when the king and Ren’s half-brother, Crown Prince Hellic are brutally murdered, Ren is accused. Now, he is forced to flee the city together with the mysterious prisoner Anik who may know how to survive in the wild, but who seems to have an agenda of his own, one that may spell danger for Ren. Ren’s accuser now sits on his family’s throne, and things are about to get much, much worse. It may be time to seek help in unexpected places. Stag's Run is the first book in the Iron Breakers series