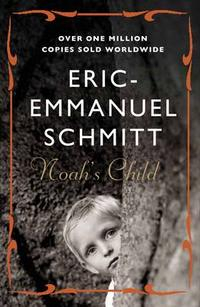 From one of the world's biggest selling authors comes another million-copy worldwide bestseller: A beautiful and tender fable seen the world through the eyes of a Jewish child living in Belgium under the Nazi occupation. Isn't it time you discovered Eric-Emmanuel Schmitt? It is 1942 and the Jews are being deported from Belgium. Separated from his parents, seven-year-old Joseph must go into hiding. He is taken in the dead of night to an orphanage, the Villa Jaune, where the benign and enigmatic Father Pons presides over a motley assortment of children. With the ever-present threat of the Gestapo growing closer, Joseph learns that the secret of survival is to conceal his Jewish heritage. Soon Joseph also discovers that Father Pons has a secret of his own: he is risking his life not only for the boys in his care, but for the Jewish faith itself. Sensitive, funny and deeply humane, Noah's Child is a simple fable that reveals the complexities of faith, bravery and the human condition.