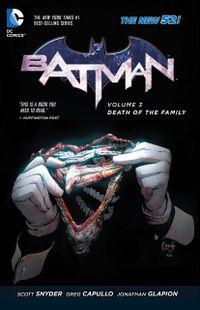 DEATH OF THE FAMILY

Guess who's back? Gotham city has been free ... since the joker limped off the streets of gotham, mutilated and scarred after a madman carved the pale white skin off his face. For one year Batman and his allies have waited, watchful and uneasy, wondering when he would return. The Joker is back, and he has transformed into something more deadly and insidious than ever before. For once the Dark Knight doesn't seem to be his target. Instead, the Joker turns his vile infamy toward Commissioner Gorddon, Alfred, Robin, Nightwing, Batgirl. Red Hood and Red Robin... the only family Bruce Wayne has left. The Clown Prince of Crime will unleash his most unpredictable, vicious and psychotic assault on everyone Batman holds dear. Can Batman stop his archirival's most deranged assault ever? Or will the revelation of a deadly secret cost him everything he's built?