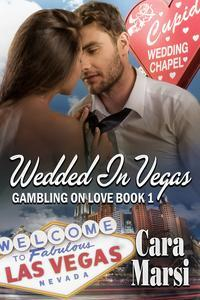 A reluctant bride A hot Hollywood actor What happens in Vegas... Bartending in Las Vegas is the means to an end for Analisa Barbero. As soon as she finishes school she can get her dream job as a teacher. With her hard-working single mom temporarily disabled, money is tight and the hours are long. Who has time for dating? But when a sexy nerd asks her out, Analisa does what everyone else in Las Vegas does: she takes a chance and says yes. Some people come to Sin City to gamble. Some come to start over. And some come to hide out. Cole Lassiter is Hollywood’s hottest property. Fed up with phoniness and paparazzi parasites, he just wants to be an ordinary nobody for a while. But when his deception causes a pretty bartender to lose her job, he makes her the kind of offer that can only happen in the city of make-believe: Marry him for one year in exchange for a house, money, and all-expenses-paid tuition for school. If she agrees, maybe the tabloids will finally give him a break. Neither Analisa nor Cole thought love was in the cards for them. But what happens in Vegas doesn’t always stay in Vegas. Is Analisa willing to gamble her future on a man who already deceived her once? Everyone in Las Vegas knows one thing: You have to roll the dice if you want to hit the jackpot. And love is worth the risk. Special pre-order price of 99 cents.