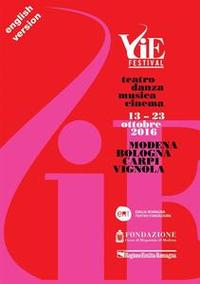 VIE Festival inaugurated in 2005 as an attempt to experience contemporary times, discover new identities and individuals in the world of live performance. It is an annual event held in the month of October in some cities of Emilia Romagna Region. Organizer and founder is ERT Fondazione Teatro Nazionale based in Modena with the financial support of Fondazione Cassa di Risparmio di Modena. The project issued from the successful experience of Le vie dei festival which, during the decade 1994/2004, has welcomed in Modena from the mid October to the mid December, some of the most interesting protagonists of Italian and international summer festivals. Among them, Carmelo Bene, Thierry Salmon, Lev Dodin, Peter Brook, Maguy Marin, Joseph Chaikin, Philip Glass, Robert Wilson and Peter Stein are worth mentioning.