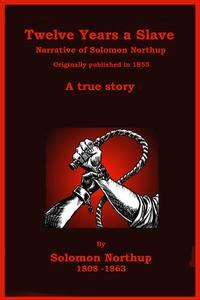 The year was 1841. That "Peculiar Institution" of slavery was running full bore in the south. Solomon Northup, age 33, a well-educated black man who was born into freedom, resided with his wife and three children in his native state of New York. Solomon was kidnapped and sold into slavery in our nation's capital...Washington, D.C. The perpetrators of this crime, in order to sell Solomon, insisted he was an escaped slave from Georgia. Whenever Solomon protested and declared himself a free man, he was terribly beaten...once near to death. Solomon was sold and transported to Louisiana where he spent twelve long years of suffering, degradation, whippings and hard labor as a slave. For fear of his life, he had to give up the idea of convincing his masters and others that he was actually a free man and a citizen of New York and he resigned himself to the accept the life of a slave. But, through his years of captivity, he never once stopped believing that one day... he would be freed and again become united with his family in New York.