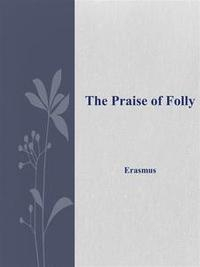 THE PRAISE OF FOLLY

Dutch humanist and theologian. Erasmus was a classical scholar who wrote in a "pure" Latin style and enjoyed the sobriquet "Prince of the Humanists." He has been called "the crowning glory of the Christian humanists." Using humanist techniques for working on texts, he prepared important new Latin and Greek editions of the New Testament. These raised questions that would be influential in the Protestant Reformation and Catholic Counter-Reformation. He also wrote The Praise of Folly, Handbook of a Christian Knight, On Civility in Children, Copia: Foundations of the Abundant Style, Julius Exclusus, and many other works.