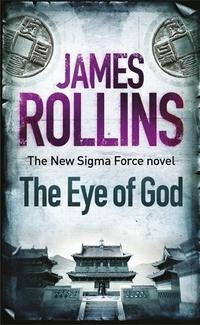 THE EYE OF GOD

When a US military satellite crashes into the remote wilds of Mongolia, a desperate search begins. The satellite contains a code-black physics project - research linked to the birth of our universe. And the last blurry image from the satellite offered a terrifying glimpse of the future. Meanwhile, a mysterious parcel arrives at the Vatican, containing a skull scrawled with ancient Aramaic and a tome bound with human skin. DNA testing reveals that both are from Genghis Khan - the Mongol King whose undiscovered tomb is rumoured to hold the vast treasures and knowledge of a lost empire. Commander Gray Pierce and SIGMA race to uncover a truth tied to the fall of the Roman Empire, a mystery bound in the roots of Christianity, and a weapon that holds the fate of humanity.