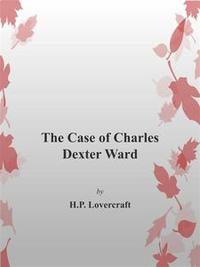 THE CASE OF CHARLES DEXTER WARD

The Case of Charles Dexter Ward is a short epistolary novel (51,500 words) by H. P. Lovecraft, written in early 1927, but not published during the author's lifetime. Set in Lovecraft's hometown of Providence, Rhode Island, it was first published (in abridged form) in the May and July issues of Weird Tales in 1941; the first complete publication was in Arkham House's Beyond the Wall of Sleep collection (1943). It is included in the Library of America volume of Lovecraft's work. The novel, set in 1918, describes how Charles Dexter Ward becomes obsessed with his distant ancestor, Joseph Curwen, an alleged wizard with unsavory habits. Ward physically resembles Curwen, and attempts to duplicate his ancestor's Qabalistic and alchemical feats. He eventually uses this knowledge to physically resurrect Curwen. Ward's doctor, Marinus Bicknell Willett, investigates Ward's activities and is horrified by what he finds (font: Wikipedia)