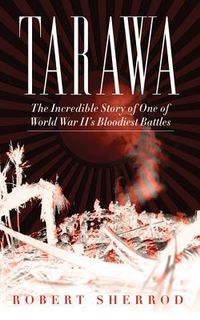 In the summer of 1943, at the height of World War II, battles were exploding all throughout the Pacific theater. In mid-November of that year, the United States waged a bloody campaign on Betio Island in the Tarawa Atoll, the most heavily fortified Japanese territory in the entire Pacific. They were fighting to wrest control of the island to stage the next big push toward Japan--and one journalist was there to chronicle the horror. Dive into war correspondent Robert Sherrod's battlefield account as he goes ashore with the assault troops of the U.S. Marines 2nd Marine Division in Tarawa. Follow the story of the U.S. Army 27th Infantry Division as nearly 35,000 troops take on less than 5,000 Japanese defenders in one of the most savage engagements of the war. By the end of the battle, only seventeen Japanese soldiers were still alive. This story, a must for any history buff, tells the ins and outs of life alongside the U.S. Marines in this lesser-known battle of World War II. The battle itself carried on for three days, but Sherrod, a dedicated journalist, remained in Tarawa until the very end, and through his writing, shares every detail. Skyhorse Publishing, as well as our Arcade imprint, are proud to publish a broad range of books for readers interested in history--books about World War II, the Third Reich, Hitler and his henchmen, the JFK assassination, conspiracies, the American Civil War, the American Revolution, gladiators, Vikings, ancient Rome, medieval times, the old West, and much more. While not every title we publish becomes a New York Times bestseller or a national bestseller, we are committed to books on subjects that are sometimes overlooked and to authors whose work might not otherwise find a home.