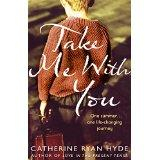 TAKE ME WITH YOU

Sinopsis de TAKE ME WITH YOU

Seth and his little brother Henry havent had the most stable of upbringings. Their father has been in and out of jail; their mother took off years ago and hasn't been seen since. Life is constantly uncertain - but a twist of fate could be just what they need. August stopped drinking the day his son died. While on a journey thats very close to his heart, a breakdown leaves him stranded in a small town and at the mercy of the local mechanic - Seth and Henrys father. But then August is presented with an offer he doesn't expect: take the two boys with him for the summer, and pay no charge for the repairs. As the unlikely trio set out on their road trip, the most unlikely, unforgettable friendship begins to take shape

0 reseñas sobre el libro TAKE ME WITH YOU