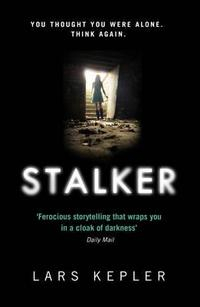 The much-anticipated fifth thriller in Lars Kepler's bestselling series featuring Joona Linna. Perfect for fans of Stieg Larsson and Jo Nesbo. A video-clip is sent to the National Criminal Investigation Department. Someone has secretly filmed a woman through her window from the garden. The next day she is found dead after a frenzied knife-attack. The police receive a second film of another unknown woman. There is no way of identifying her before time runs out. When her husband finds her he is so traumatised that he cleans the whole house and puts her to bed. He may have seen a vital clue, but is in such an extreme state of shock that the police are unable to question him. Psychiatrist Erik Maria Bark is called in to hypnotise him - but what the man tells him under hypnosis leads Erik to start lying to the police. If the lights are on, a stalker can see you from outside. But if the lights are off, you can't see a stalker who is already inside the house.