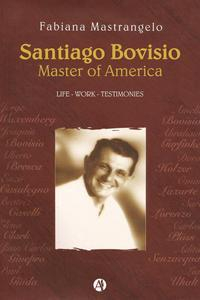 Santiago Bovisio, Master of America contains two parts I) Don Santiago, Life and Work of Mr. Santiago Bovisio; II) Testimonies about Don Santiago.It contains sources used to prepare the biography of Don Santiago. It is a spiritual duty to allow that ALL may read the wisdom expressed by testimonies of his disciples, because the Message of Don Santiago and his Holy Work are Universal Essentially, as an educator, Santiago Bovisio and choose America to carry out his labor. His work reflects this. He created Cafh (1937, Buenos Aires), for Spiritual Development, spread today throughout America, Europe,  Middle East, and Oceania. In addition, he established the American Spiritualistic University (1940, Rosario); the Argentine San Martin Educational Union (1943, Cordoba); the Santa Rosa College, later called “Leo Bovisio” College (1948, Embalse, Cordoba); and the School of the Aesthetic Cultural Union in Cuyo (Argentina), among other works. The educational role and teaching of Don Santigo are present in different dialogues and testimonies of his disciples, because a primordial axis of his work was to teach to live and he created a method for it.