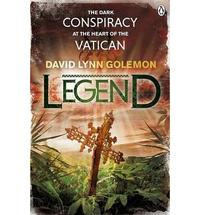 Let David Lynn Golemon thrill you with Legend from the magnificent Event Group series. Buried for centuries, the Vatican's darkest secret is about to be discovered. And that attracts the attention of the Event Group, a top secret government organisation made up of soldiers, scientists and historians, dedicated to uncovering the truth behind history's greatest myths. When an old manuscript, buried deep within the Vatican archives, suggests that the legendary lost city of El Dorado may be more than a myth, it also reveals the terrible price that's been paid to protect it. An Event Group team, led by Major Jack Collins, is dispatched to the jungles of Amazon Basin. Their mission: a quest that has over centuries meant disappearance and death. For Collins and his people neither is an option...Praise for David Lynn Golemon: "Sure to satisfy fans of The X-Files". (Publishers Weekly). "Imagine mixing in a blender Tom Clancy with the movie Predator and the X-Files ...non-stop action". (Library Journal). David Lynn Golemon grew up in Chino, California and worked for the US military in a classified role. He now lives and writes in Long Island, New York. His Event Group Series includes the titles Event, Legend, Ancient, Leviathan and Primeval, all of which are available in Penguin eBook form.