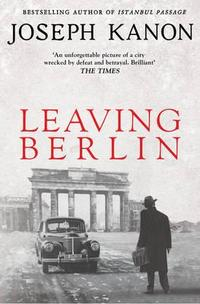 From the author of The Good German (made in a film starring George Clooney) comes a sweeping novel set in post-war Berlin. Alex Meier, a young Jewish writer, fled the Nazis for America before the war. But the politics of his youth have now put him in the crosshairs of the McCarthy witch-hunts. Faced with deportation and the loss of his family, he makes a desperate bargain with the fledgling CIA: he will earn his way back to America by acting as their agent in his native Berlin. But almost from the start things go fatally wrong. Filled with intrigue and the moral ambiguity of conflicted loyalties, Leaving Berlin is a masterfu thriller and a love story that brings a shadowy period of history vividly to life.