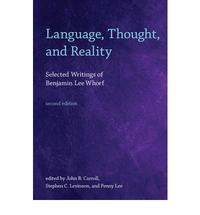 The pioneering linguist Benjamin Whorf (1897--1941) grasped the relationship between human language and human thinking: how language can shape our innermost thoughts. His basic thesis is that our perception of the world and our ways of thinking about it are deeply influenced by the structure of the languages we speak. The writings collected in this volume include important papers on the Maya, Hopi, and Shawnee languages, as well as more general reflections on language and meaning. Whorf's ideas about the relation of language and thought have always appealed to a wide audience, but their reception in expert circles has alternated between dismissal and applause. Recently the language sciences have headed in directions that give Whorf's thinking a renewed relevance. Hence this new edition of Whorf's classic work is especially timely. The second edition includes all the writings from the first edition as well as John Carroll's original introduction, a new foreword by Stephen Levinson of the Max Planck Institute for Psycholinguistics that puts Whorf's work in historical and contemporary context, and new indexes. In addition, this edition offers Whorf's "Yale Report," an important work from Whorf's mature oeuvre.