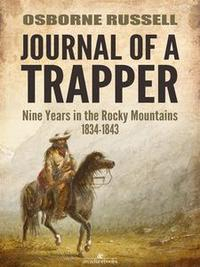 Journal of a Trapper is one of the most important first hand accounts of the mountain man era. In it, Russell provides a detailed narrative describing the day-to-day life of an ordinary trapper in the Rocky Mountains. The Journal begins when Russell hired on with Nathaniel Wyeth's second expedition to the west. He participated in the establishment of Fort Hall, and later became a free trapper. He trapped for nine years in the greater Yellowstone region before leaving the mountains to settle in Oregon.