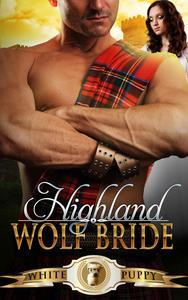 When the handsome Highland Wolf takes her... In the medieval times, born to the Earl of Carlisle, Berthilda Brooke Howard lives in a beautiful castle that her family owns. Her daring nature and free thinking mind have always caused her family trouble. Sheltered from court life, she thinks of her life as utterly boring until she has to wed a cousin she has known since childhood. Meanwhile, trouble broils between Scotland and England until a horde of barbaric highlanders invade her castle. Their initial intent to destroy and plunder Carlisle is altered when their leader discovers a greater prize: Her. Malcolm Sinclair, laird of clan Sinclair of the highlands, is known as Wolf for his ruthlessness. When Brooke is forced to wed the Scottish barbarian, she insults him from the moment she first sets her eyes upon him. To her consternation, he appears to be undeterred by her. Her anger gives way to a peculiar thrill when she beholds his masculine warrior form. His gruff gentleness and devotion arouse tenderness within her and that frightens her more than anything else in the world. Can she really fall for her enemy?