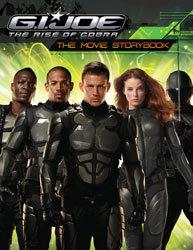 While on a mission to transport a case of nuclear warheads, Duke and Ripcord's Special Forces unit is ambushed by COBRA, a secret terrorist cell. Duke soon realizes his long-lost love, the Baroness (also known as Ana) headed up the ambush, but before he can do anything, General Hawk's team of JOES shows up and sends the entire COBRA team packing. Duke and Ripcord follow the JOES back to their base, the Pit, where they are briefed on what the JOES know. Duke insists on joining the JOES to complete the warhead transport and expose COBRA's ultimate plan to set off the warheads in four major European cities. The 48-paged Movie Storybook is a retelling of the movie script for ages 5-8, with full-color image stills throughout.