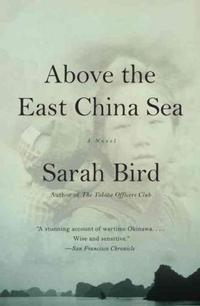 ABOVE THE EAST CHINA SEA

A "Seattle Times" Best Book of the Year Okinawa, present day: Luz, a teenage military brat, has moved to the island's U.S. Air Force base with her mother, a no-nonsense sergeant. Luz's mother hopes that the move will reconnect them with the Okinawan branch of their family--and help them heal from the death of Luz's beloved older sister. This is an island where departed spirits mingle with the living, and interwoven with Luz's narrative is the story of an Okinawan girl, Tamiko Kokuba, who in 1945 was plucked from her high school and trained to work in the Imperial Army's horrific cave hospitals. Both of these extraordinary young women are seeking peace, and as Luz digs deeper and deeper into her past, their quests will intersect. "Above the East China Sea "tells the entwined stories of two lives connected across time by the shared experience of loss, the strength of an ancient culture, and the power of family love.