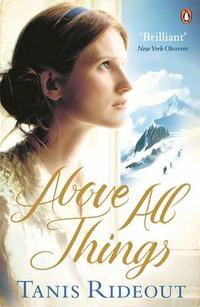 Above All Things is a heart-wrenching novel about George Mallory s fatal attempt to conquer Everest, from debut author Tanis Rideout. In the Himalayas two climbers strike out for the summit of the Earth s highest mountain - aiming to be the first to the top. In Cambridge, a wife collects the milk, gets three children out of bed and waits for a letter, a telegram - for news of her husband. It is 1924 and George Mallory and Andrew Irvine are attempting to be the first to conquer Everest. They face inhuman cold and wind, but putting one foot falteringly after another they reach for the peak. Meanwhile, at home Ruth Mallory goes about her day, hiding her doubts and the uncertainty about the future with or - god forbid - without George. A powerful, moving story of a husband driven to extraordinary lengths by his ambition and a wife terrified she will lose him to a pitiless rival, Above All Things brings to life one of the great tragedies - and love stories - of the last century. Deeply fascinating . (Independent). Above All Things has it all: adventure, tragedy, mystery, and a deeply moving love story. It s gorgeously written and beautifully paced. I could not put it down. Prepare to be dazzled . (Alison Pick, author of Far to Go). Tanis Rideout s work has appeared in numerous publications and been shortlisted for several prizes, including the Bronwen Wallace Memorial Award for Emerging Writers and the CBC Literary Award. In 2006, she was named the Poet Laureate for Lake Ontario by the environmental advocacy group Lake Ontario Waterkeeper and joined Gord Downie of The Tragically Hip on a tour to promote environmental justice on the lake. Born in Belgium, Tanis grew up in Bermuda and in Kingston, Ontario, and now lives in Toronto. She recently received her MFA from the University of Guelph-Humber. Above All Things is her first novel.