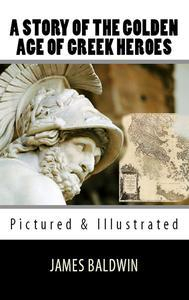 A STORY OF THE GOLDEN AGE OF GREEK HEROES

YOU have heard of Homer, and of the two wonderful poems, the Iliad and the Odyssey, which bear his name. No one knows whether these poems were composed by Homer, or whether they are the work of many different poets. And, in fact, it matters very little about their authorship. Everybody agrees that they are the grandest poems ever sung or written or read in this world; and yet, how few persons, comparatively, have read them, or know any thing about them except at second-hand! Homer commences his story, not at the beginning, but "in the midst of things;" hence, when one starts out to read the Iliad without having made some special preparation beforehand, he finds it hard to understand, and is tempted, in despair, to stop at the end of the first book. Many people are, therefore, content to admire the great masterpiece of poetry and story-telling simply because others admire it, and not because they have any personal acquaintance with it. Now, it is not my purpose to give you a "simplified version" of the Iliad or the Odyssey. There are already many such versions; but the best way for you, or any one else, to read Homer, is to read Homer. If you do not understand Greek, you can read him in one of the many English translations. You will find much of the spirit of the original in the translations by Bryant, by Lord Derby, and by old George Chapman, as well as in the admirable prose rendering by Butcher and Lang; but you can get none of it in any so-called simplified version.