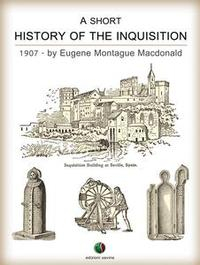 A SHORT HISTORY OF THE INQUISITION

“…Persecution has been as binding a duty on Christians as attendance upon worship, or support of the clergy, or anything else whereby devotion to the faith has been made manifest. Acts of persecution are somewhat loosely said to be done “in the name of” religion. The only accurate form of the proposition is that they are done by religion as the moving spirit and by the church as the interpreter of religion, “in the name of” Jesus Christ, or some other prophet, or of the deity acknowledged by the persecutors. This aspect of the truth has not before been set forth and proved by citation of facts. No other book contains between its covers so full an account of the offenses against humanity which have owed their inspiration to religion. Protestants have written books to show the persecuting spirit of Catholicism, and Catholics have done the same disservice to Protestantism. The need is felt for a work giving the persecutions of both, and their cause, written from the point of view of the Freethinker, upon whose hands there is no blood…”

0 reseñas sobre el libro A SHORT HISTORY OF THE INQUISITION