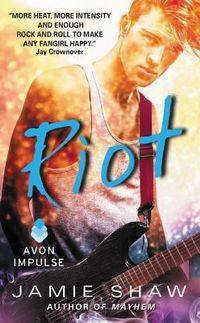 When Dee Dawson meets sexy mohawked guitarist Joel Gibbon, she knows it won’t be long before she has him wrapped around her finger. No guy has ever been able to resist her… but Dee’s met her match in a player like Joel. Dee’s not the relationship type—not after seeing the pain “love” has caused her friends and family—yet she’s desperate to make Joel want her more than anyone else. He quickly becomes an obsession, and when a reckless attempt to make him jealous ends in disaster, Dee turns into the damsel in distress she never wanted to be. With her carefree world crashing down around her, the last thing she needs is Joel’s pity. But Joel is suddenly determined to prove he cares, and no matter how hard Dee tries to push him away, he refuses to let her shut him out. Now the girl who swore she’d never say those three little words must choose between guarding her heart and losing Joel forever… or falling head-over-heels for the tattooed rock star of her dreams.