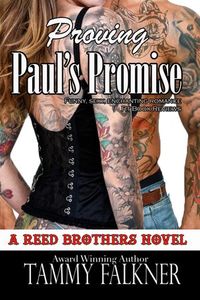 He has watched her from afar… Paul Reed has been raising children since he was a child himself, but he wouldn’t change his life, even if given an opportunity. That is, until one of his brothers says four little words that shake the foundation of his world. “She’s not a lesbian,” shouldn’t be quite so earth shattering, but suddenly the woman he loves is available, and he’ll do whatever it takes to win her over. They call her Friday, and she’s hiding more than just her name... Friday has worked in the Reeds’ tattoo parlor for four years. She’s become more than just an employee, and she loves being in the middle of something so wonderful. She treasures the way the Reeds live for one another, and she adores the way they take care of their family. She would do just about anything to be part of it, if not for the fact that she doesn’t deserve a family of her own. Or does she? Friday is punishing herself for her past, and by doing so, she pushes away the one man who could truly love her. Separately, they’re strong. Together, they’re vulnerable. As a team, they rock.