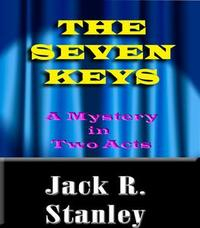 Bestselling novelist William Hollowell McGee makes a $50,000.00 bet that he can write a novel in one night. His best friend supplies the place, a summer mountain resort closed for the winter, and supplies him with the only key. However as the tries to work, he is visited through the night by a variety of including an attractive TV reporter, and criminals who are trying to make a secret payoff to the local mayor for cable and internet rights. William Hollowell McGee writes bestselling, quirky fiction with lots of twists and turns.  He’s just bragged that he can write one of his novels in a single night, given an interesting, quiet place to work.  His friend calls McGee’s bluff and says he’ll provide the “interesting and quite” place to work, a summer fishing and hiking resort which is now closed for the winter.  Additionally he promised McGee the only key to the place where he can lock himself in and produce his next novel and win $50,000.00 if he can, in fact, pull it off within 24 hours.  McGee agrees and the bet is on. At The Baldpate Inn on the top of a now snow covered mountain in the middle of a blizzard, the caretaker and his wife make up a room for McGee and light the fire in the inn’s main room.  After McGee used the land line to call his friend back in New York City to confirm he is in the inn, and in possession of the only key, the caretaker and his wife leave and McGee starts to work.