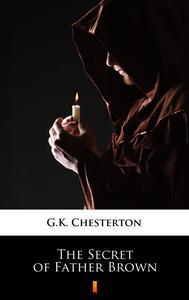 THE SECRET OF FATHER BROWN

Have you wondered how the great detectives solved their cases? In The Secret of Father Brown, while visiting Flambeau’s house Father Brown meets a curious American who has to know as some of his countrymen think Father Brown is using mystical powers. The fourth of the Father Brown detective story collections has something the first three did not: a framing sequence at the beginning and end, in which Father Brown explains to a curious person his method for solving crimes – he becomes the criminal. In this collection he „becomes” several jewel thieves and murderers, all of whom carry out their crimes in bizarre circumstances. Father Brown, or rather Chesterton, takes opportunity on occasion to indulge in a bit of Catholic apologetic or homiletic, but it never takes over the story: it makes Father Brown that much more a priest and not just a mystery-solving machine.