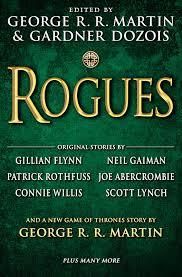 The Rogue Prince, or, a King’s Brother is a novella by George R. R. Martin, published in the 2014 anthology Rogues. It is set in the Westeros of Martin's A Song of Ice and Fire series, hundreds of years before the events of A Game of Thrones (1996) during the reign of King Viserys I Targaryen. The Rogue Prince serves as a prequel to Martin's 2013 novella The Princess and the Queen and focuses on the role played by the king’s brother, Prince Daemon Targaryen. Spanning the entire reign of Viserys I — from his grandfather Jaehaerys I Targaryen's death to his own — The Rogue Prince chronicles the evolving relationship between Viserys and Daemon as the king's plan for succession cements a rivalry within the family that plays out in The Princess and the Queen.