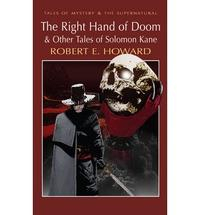 THE RIGHT HAND OF DOOM & OTHER TALES OF SOLOMON KA

The sixteenth-century Puritan Solomon Kane has a thirst for justice which surpasses common reason. Sombre of mood, clad in black and grey, he 'never sought to analyse his motives and he never wavered once his mind was made up. Though he always acted on impulse, he firmly believed that all his actions were governed by cold and logical reasonings...A hunger in his soul drove him on and on, an urge to right all wrongs, protect all weaker things, and avenge all crimes against right and justice'. Immune to the attractions of the opposite sex, he seems drawn by some psychological distress beacon to places where he knows only that he will be called upon to defend the helpless or (more often) exact retribution on their behalf. Himself a Christian, possessed of enormous strength and skill in swordplay, he yet has little hesitation in calling upon the assistance of his Voodoo-practising friend N'Longa when strength, skill and Christian belief are not enough.