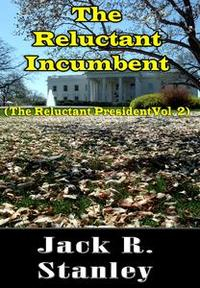 This novel begins only moments after the ending of The Reluctant President. A widowed Texas surgeon, Porter Randall, serving his second term in Congress has become the President of the United States, reluctantly at the sudden death of his predecessor. Giving a speech in support of his first State of the Nation address, the new Chief Executive was shot in a Milwaukee airport hangar.  Vice President, Sundee Ives, former governor of New Hampshire, becomes Acting President as the President lays in an unresponsive coma at Walter Reed Hospital.  The nation is still in flux from the residual sandals of the previous administration and the scourge of Islamic terrorism continues to escalate.  How will the reluctant President deal with being the Reluctant Incumbent?