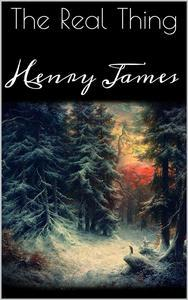 When the porter’s wife (she used to answer the house-bell), announced “A gentleman—with a lady, sir,” I had, as I often had in those days, for the wish was father to the thought, an immediate vision of sitters. Sitters my visitors in this case proved to be; but not in the sense I should have preferred. However, there was nothing at first to indicate that they might not have come for a portrait. The gentleman, a man of fifty, very high and very straight, with a moustache slightly grizzled and a dark grey walking-coat admirably fitted, both of which I noted professionally—I don’t mean as a barber or yet as a tailor—would have struck me as a celebrity if celebrities often were striking. It was a truth of which I had for some time been conscious that a figure with a good deal of frontage was, as one might say, almost never a public institution. A glance at the lady helped to remind me of this paradoxical law: she also looked too distinguished to be a “personality.” Moreover one would scarcely come across two variations together.