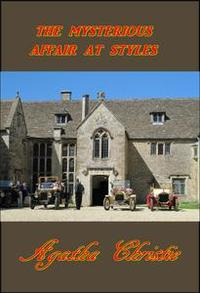 THE MYSTERIOUS AFFAIR AT STYLES

The Mysterious Affair at Styles is a detective novel by Agatha Christie. It was written in the middle of the First World War, in 1916, and first published by John Lane in the United States in October 1920 and in the United Kingdom by The Bodley Head (John Lane's UK company) on 21 January 1921. The US edition retailed at $2.00 and the UK edition at seven shillings and sixpence (7/6). Styles was Christie's first published novel. It introduced Hercule Poirot, Inspector (later, Chief Inspector) Japp, and Arthur Hastings.[3] Poirot, a Belgian refugee of the Great War, is settling in England near the home of Emily Inglethorp, who helped him to his new life. His friend Hastings arrives as a guest at her home. When the woman is killed, Poirot uses his detective skills to solve the mystery. This is also the setting of Curtain, Poirot's last case.