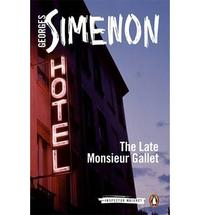 This is the second book in the new Penguin Maigret series: Georges Simenon's devastating tale of misfortune, betrayal and the weakness of family ties, in a new translation by Anthea Bell. Instead of the detail filling itself in and becoming clearer, it seemed to escape him. The face of the man in the ill-fitting coat just misted up so that it hardly looked human. In theory this mental portrait was good enough, but now it was replaced by fleeting images which should have added up to one and the same man but which refused to get themselves into focus. The circumstances of Monsieur Gallet's death all seem fake: the name the deceased was travelling under and his presumed profession, and more worryingly, his family's grief. Their haughtiness seems to hide ambiguous feelings about the hapless man. In this haunting story, Maigret discovers the appalling truth and the real crime hidden behind the surface of lies. Penguin is publishing the entire series of Maigret novels in new transaltions. "Compelling, remorseless, brilliant". (John Gray). "One of the greatest writers of the twentieth century...Simenon was unequalled at making us look inside, though the ability was masked by his brilliance at absorbing us obsessively in his stories". (Guardian). "A supreme writer ...unforgettable vividness". (Independent). Georges Simenon was born in Liege, Belgium, in 1903. Best known in Britain as the author of the Maigret books, his prolific output of over 400 novels and short stories have made him a household name in continental Europe. He died in 1989 in Lausanne, Switzerland, where he had lived for the latter part of his life. Anthea Bell is the award-winning translator of numerous French and German works: from the Asterix comics to W. G. Sebald's literary masterpiece Austerlitz.