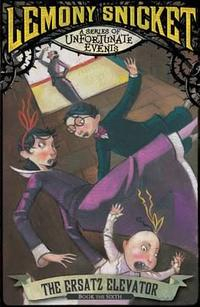 There is nothing to be found in the pages of A Series of Unfortunate Events but misery and despair. You still have time to choose another international best-seller to read. But if you must know what unpleasantries befall the charming and clever Baudelaire children read on ...The Ersatz Elevator is the sixth instalment in A Series of Unfortunate Events in which Violet, Klaus and Sunny Baudelaire encounter a darkened staircase, a red herring, friends in a dire situation, three mysterious initials, a liar with an evil scheme, a secret passageway and parsley soda. With 5 million copies sold in the UK alone, one might consider Lemony Snicket's A Series of Unfortunate Events to make him one of the most successful children's authors of the past decade. We, however, consider these miserable so-called adventure stories and the Hollywood film starring Jim Carrey that accompanied the books for children as nothing more than a dreadful mistake.