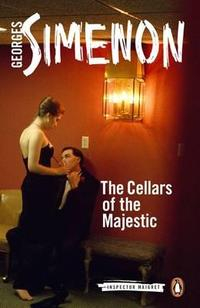 THE CELLARS OF THE MAJESTIC: INSPECTOR MAIGRET

The dark side of glamorous expat life in Paris is brought to life in this new translation, book twentyone in the new Penguin Maigret series. Try to imagine a guest, a wealthy woman, staying at the Majestic with her husband, her son, a nurse and a governess...In a suite that costs more than a thousand francs a day...At six in the morning, she's strangled, not in her room, but in the basement locker room...In all likelihood, that's where the crime was committed...What was the woman doing in the basement? Who could have lured her down there, and how? Especially at an hour when people of that kind are usually still fast asleep. Penguin is publishing the entire series of Maigret novels in new translations. This novel has been published in a previous translation as Maigret and the Hotel Majestic. "Compelling, remorseless, brilliant." (John Gray). "One of the greatest writers of the twentieth century...Simenon was unequalled at making us look inside, though the ability was masked by his brilliance at absorbing us obsessively in his storie." (Guardian). "A supreme writer...unforgettable vividness." (Independent). Georges Simenon was born in Liege, Belgium, in 1903. Best known in Britain as the author of the Maigret books, his prolific output of over 400 novels and short stories have made him a household name in continental Europe. He died in 1989 in Lausanne, Switzerland, where he had lived for the latter part of his life.