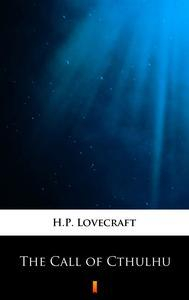 THE CALL OF CTHULHU

”The Call of Cthulhu” is the story of a man who uncovers evidence of otherworldly beings residing in a state of hibernation deep beneath the surface of the Earth’s oceans. Though the image of Cthulhu is by no means original, as it is heavily borrowed from Scandinavian lore among other sources, Lovecraft’s descriptions–in this case of a basrelief carved in its likeness–are still nothing short of chilling. It is the only story written by Lovecraft in which the extraterrestrial entity Cthulhu himself makes a major appearance. The story is written in a documentary style, with three independent narratives linked together by the device of a narrator discovering notes left by a deceased relative. Considered as the father of contemporary horror fiction, H. P. Lovecraft shows exquisite details in The Call of Cthulhu that perfectly denote his „cosmic indifferentism” beliefs and takes advantages of his imaginative universe filled with immense entities to demonstrate how weak humans really are.