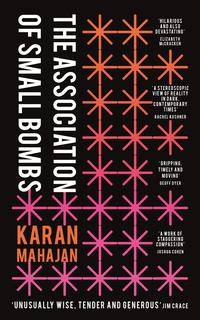 THE ASSOCIATION OF SMALL BOMBS

On a hot May day in 1996 a car bomb detonates in a Delhi marketplace. Just a small bomb, but it is fatal for two Khurana school boys. Their friend Mansoor survives the blast bearing the physical and psychological effects of the bomb. After a failed stint at university in America, Mansoor returns to Delhi, where he becomes entangled with the mysterious and charismatic Ayub, a fearless young activist. Yet Mansoor isn't the only one damaged by the bomb. Mr and Mrs Khurana are trapped in labyrinthine legal battles, desperate for justice to appease their grief. Young bomb maker Shockie, striving for the future independence of his Kashmiri homeland, is also in Delhi that day, and afterwards will be inextricably linked to the blast. Humane and clear-eyed in equal measure, The Association of Small Bombs tackles the most urgent issue of today with astonishing empathy. Karan Mahajan writes about the effects of terrorism on victims and perpetrators alike, proving himself to be one of the most provocative and dynamic novelists of his generation.