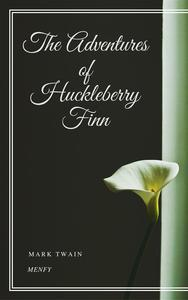 THE ADVENTURES OF HUCKLEBERRY FINN

Adventures of Huckleberry Finn (often shortened to Huck Finn) is a novel written by American humorist Mark Twain. It is commonly used and accounted as one of the first Great American Novels. It is also one of the first major American novels written using Local Color Regionalism, or vernacular, told in the first person by the eponymous Huckleberry "Huck" Finn, best friend of Tom Sawyer and hero of three other Mark Twain books.