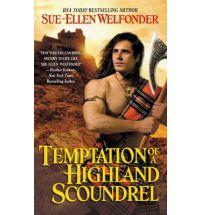 TEMPTATION OF A HIGHLAND SCOUNDREL

In Temptation of a Highland Scoundrel, Kendrew Macintosh's reputation precedes him: he wields an ax with deadly precision, strikes fear into his enemies, and lusts after beautiful women. But Kendrew has never met someone whose passion rivals his own-until an unexpected encounter with a mysterious woman. Unfortunately, he soon discovers that the vixen is Isobel Cameron, daughter of an enemy clansman. Their relationship is forbidden and Kendrew breaks away immediately. Isobel has her own ideas. She has lusted after Kendrew for some time and plans to draw the fierce warrior back into her arms. But in the darkness, villainous forces are at play--an enemy is determined to keep the two lovers apart, even if it means death.