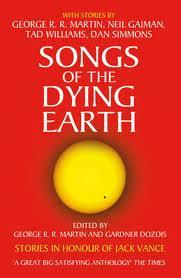 SONGS OF THE DYING EARTH

Return to the unique and evocative world of The Dying Earth in this tribute anthology featuring the most distinguished fantasists of our day. Here are twenty-two brand-new adventures set in the world of Jack Vance's greatest novel. A dim place, ancient beyond knowledge. The sun is feeble and red. A million cities have fallen to dust. Here live a few thousand souls, dying, as the Earth dies beneath them. Just a few short decades remain to the long history of our world. At the last, science and magic are one, and there is evil on Earth, distilled by time ! Earth is dying. Half a century ago, Jack Vance created the world of the Dying Earth, and fantasy has never been the same. Now, for the first time, Jack has agreed to open this intriguing and darkly beautiful world to other fantasists, to play in as their very own. The list of twenty-two contributors eager to honour Jack Vance by writing for this anthology includes Neil Gaiman, Tad Williams, Elizabeth Hand, Tanith Lee, Dan Simmons, Robert Silverberg, and George R.R. Martin himself.