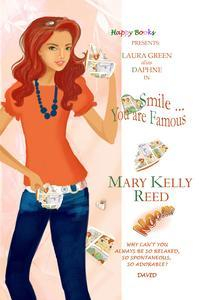 SMILE ... YOU ARE FAMOUS

Sinopsis de SMILE ... YOU ARE FAMOUS

SMILE ... YOU ARE FAMOUS - TAKING REVENGE MAY LEAD TO STRANGE PATHS. My name is Laura and I’ve always led a life free of surprises, which suits me perfectly. Imagine my bewilderment when, a few weeks before my wedding, I discover that everyone is identifying me with Daphne, a comic series heroine. At first, I smile at the whims of the universe, but my smile fades away when I realize that Daphne and I are so alike because she was created by David, my ex-fiancé. If only he’d portrayed me as a superb, intelligent creature … No, Daphne has to be depicted as stingy. Ever since then, I’ve only had one thing on my mind: to get revenge on him; and believe me, I have quite an imagination. And for those of you who are wondering … no, I’m not stingy. What do you mean you don’t believe me? EXCERPT 1 “David!” I get up gracefully to embrace him. Everybody else watches on, dumbstruck, while David stares at me, wide-eyed. “Aren’t you going to hug me back?” I flash him a dazzling smile. For someone who tends to have her head in the clouds, I sure know how to react quickly. “How long has it been since we last saw each other? Three years, right?” “Yes, that’s right.” He seems to have rapidly regained his outward composure but I can see his temple beating. My mother is surprised to find peace and order when she returns from the kitchen. “Why are you all so quiet?” “Everybody was expecting me to slap David across the face, and they are all surprised that I gave him a hug instead. They’re still in shock.” I find that I’m playing my part beautifully. “I thought you would when you think of the state you were in this afternoon!” Thanks, Mom, for revealing to everyone how much all of this has affected me. “I’ve thought it over. There are worse things in life besides having thousands of people thinking you’re a cheapskate, right David?” I avoid looking at him for longer than necessary for fear he would then realize that the only thing I truly want is to knock him out cold. However, when our eyes meet again, my gaze unfortunately gives it away. He’s onto me now. “Of course. But, all the same, Laura … coming off as a cheapskate in front of the entire country, the whole world even, that’s probably not easy to take in, is it?” What’s he playing at? Is he actually trying to provoke me now? Knowing him though, this shouldn’t have come as a surprise. He’s not one to refuse a confrontation against an opponent. “I admit that if I were you, I wouldn’t be so cool about it. Congrats on controlling your emotions. It’s what I always loved about you.” EXCERPT 2 “I see you two have gotten back together. And here I was, thinking I still had a chance.” Fiona turns bright red. “Oh well, I guess I’ll have to settle for some kind of financial compensation.” “What are you talking about?” “I’m sorry to disturb your morning, but I’m here on official business. I want my share of the profits from the comic books, and, not only that—I also want input on any future stories. I know you told me I couldn’t have both. but you don’t exactly have a choice because I’m not giving up until I get what I want.” David, pouring himself a cup of coffee, seems completely at ease. “But you have no right to any of that!” Fiona exclaims. “It’s David who did the work; I don’t see why he should give you anything.” “Perhaps because my lawyer said if I took him to court I could not only win record damages but also get all his contracts canceled?” Okay—my lawyer didn’t exactly say that, since I hadn’t even consulted him, but you’ve got to bet big to win big. “You’ve got to be kidding me! There is no chance you would get anything,” she rails against me while David stays calm. First off, I can’t see how this is her business. Just because I haven’t confronted her face-to-face in the past few weeks doesn’t mean I won’t do it now. What was that advice Paul gave me? Have some fun. Well, that’s exactly what I’m going to do. If she wants to play, I’m up to it. I sit down at the table and pick up the chocolate croissant David has already taken a bite of. “What do you think, sweetheart?” I simper. “I could put on a real show, act completely devastated, burst into tears … I’m sure the judge would see my side of things.” Fiona is furious, but David plays along. “You couldn’t do it,” he challenges me, snatching the croissant out of my hand. “You’re not that good an actress.” “Oh, you think so?” It’s obvious he’s enjoying himself.